Indonesians are turning to smugglers and bogus travel documents to get around bans on an annual end-of-Ramadan exodus that could send coronavirus cases skyrocketing in the world’s biggest Muslim majority nation.

Thousands are using any trick in the book to reach their hometowns in time for celebrations at the end of Islam’s holy fasting month this weekend, a festival known as Eid al-Fitr. The Aceh government has stopped all public transport operations to avoid the annual Eid al-Fitr mass exodus amid the coronavirus pandemic.

“I’m afraid people who go to other regions will come back infected and all of our efforts will be wasted.”

Every year, millions of travellers pack into airports, train stations and ports across the nearly 5,000 kilometre long archipelago in a mass migration similar to China’s Lunar New Year holiday or Christmas.

Fearing a public health disaster, the government last month slapped a ban on domestic sea and air travel and set up roadblocks to stop the cross-country movement.

It later relaxed those rules over concerns about a collapse in Southeast Asia’s biggest economy, but only for those who could prove they were virus-free and had a professional reason to travel.

That loophole was not lost on Kamal and his wife who set about getting a fake certificate for their daughter, a university student in the capital Jakarta — the country’s virus epicentre.

With the help of friends, the couple said they managed to obtain a government-agency stamped letter that claimed their daughter was hired to distribute pandemic supplies in her hometown Makassar on Sulawesi island.

“We’re very worried about her health if she stays in Jakarta,” said Kamal, who asked that his real name not be used.

“But the most important thing of all is that we miss her so much. We want to celebrate Eid al-Fitr together like in past years,” he added. 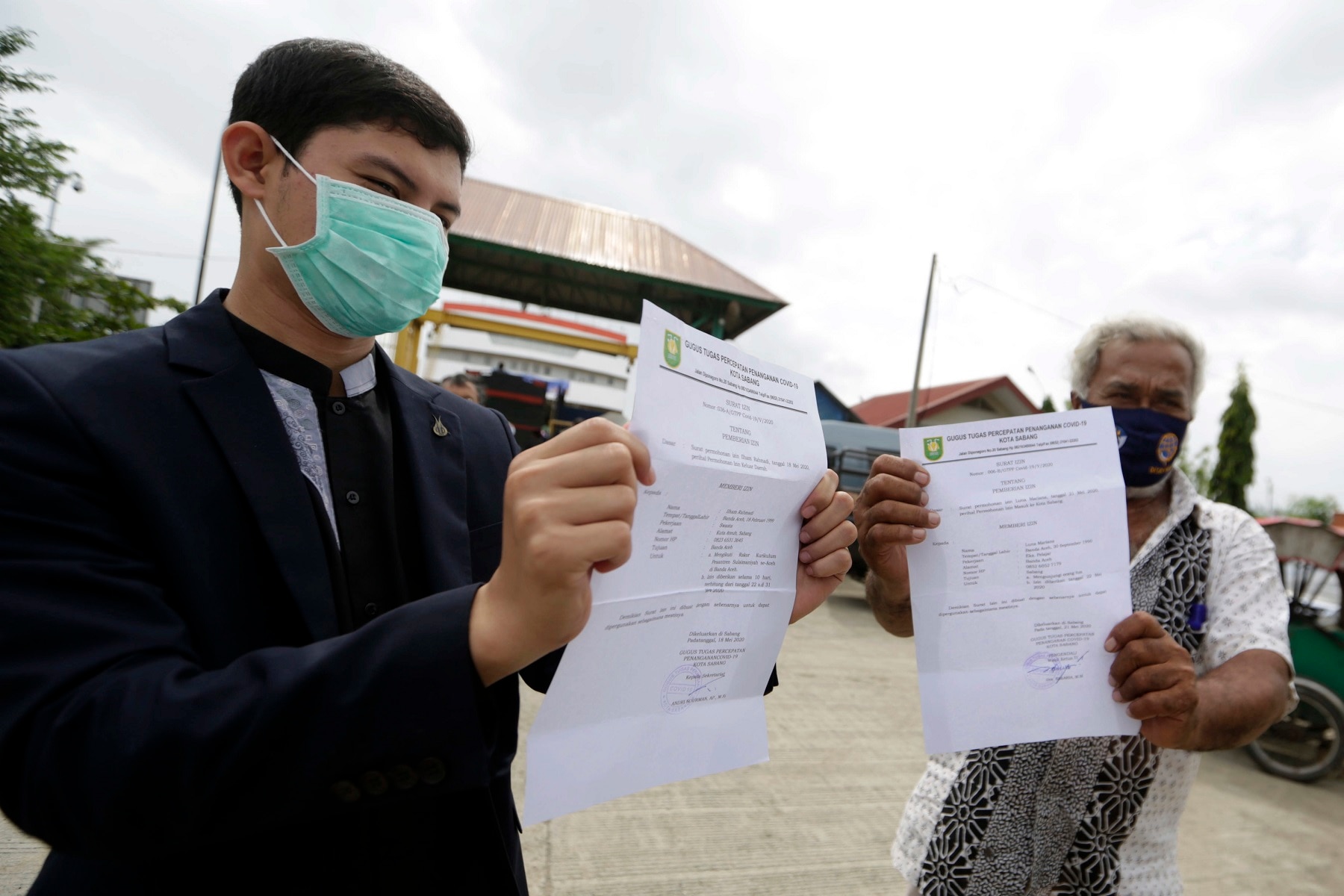 Markets have also been packed with throngs of shoppers buying food and clothes for Eid celebrations.

Some of the Southeast Asian nation’s mosques are expected to draw big crowds despite official calls to pray at home.

But that has not done much to convince the people playing a cat-and-mouse game with police by hiding inside vehicles, under tarpaulins slung over the back of trucks, or even, reportedly, inside a concrete mixer.

Authorities say they have nabbed hundreds of drivers paid to smuggle travellers.

“There are lots of ways people are trying to trick us,” said Jakarta police spokesman Yusri Yunus.

“We’re not trying to make their lives difficult. This is all meant to reduce the spread of coronavirus,” he added.

Indonesia recorded its biggest one-day jump in virus cases this week with the nationwide death toll at 1,326 — the highest in Asia outside China.

But infections and deaths are widely believed to be much higher in the country of more than 260 million, where testing rates have been among the lowest in the world. 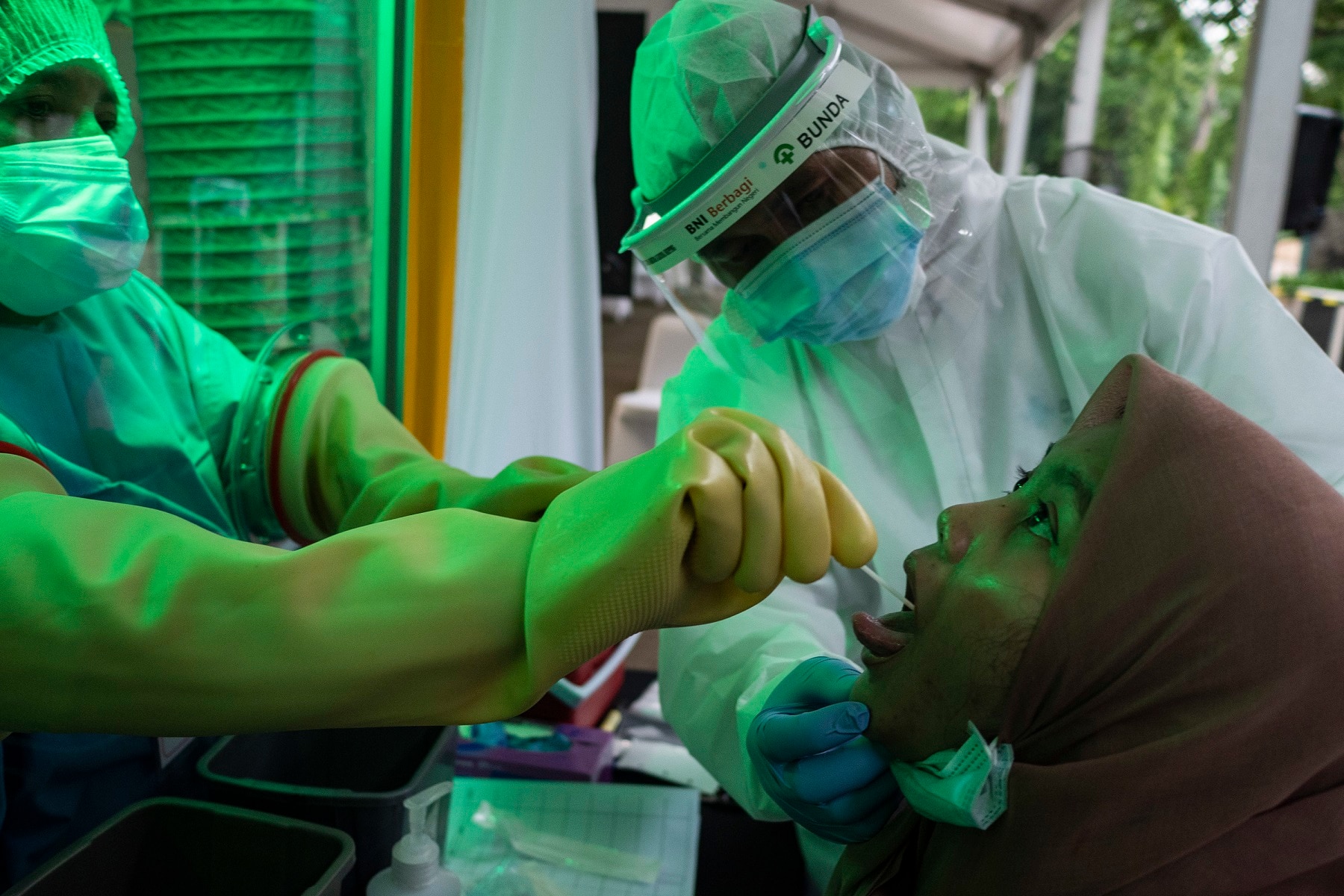 Medical workers collect swab samples to test for the coronavirus.

Laid-off Jakarta bus driver Maulana Arif Budi Satrio became a local media sensation after he claimed to have made the 500-kilometre journey to his hometown Solo on foot after his car was turned back at a checkpoint.

Whether he had vehicular help along the way remains an open question.

But the trip earned the exhausted Satrio an official scolding — and quarantine — when he arrived at his destination.

The 38-year-old said he did not have the luxury of staying put as the global pandemic threatens to push millions of Indonesians into poverty.

“The company I worked for laid off drivers like me,” he said.

“So I only had two options — stay in Jakarta with no money or go back home.”

People in Australia must stay at least 1.5 metres away from others. Check your state’s restrictions on gathering limits. Testing for coronavirus is now widely available across Australia. If you are experiencing cold or flu symptoms, arrange a test by calling your doctor or contact the Coronavirus Health Information Hotline on 1800 020 080.